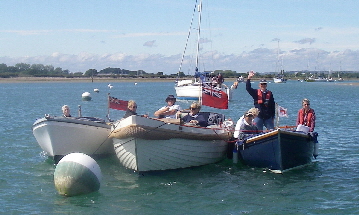 The finest day of Chichester Harbour Race week was an appropriate day for the Topless fleet to enjoy a day on the water. Heron, Amorita 2 and Phoebe left Sparkes Marina at 1100 to head up the harbour seal spotting. We were honoured that the Captain of Social Sailing chose Phoebe as his flagship for the day. 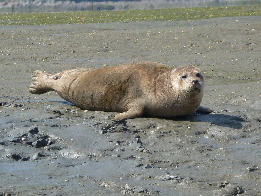 Approaching Oar Rythe we spotted the first pod of about 14 seals on the northern mud. Cutting engines and drifting up on the tide we were rewarded by sightings of two more pods and a few in the water indicating an overall colony of about 30.

We then headed back towards HISC where the Blue Plaque event was taking place prior to afternoon racing. We were able to enjoy a close-up view of the second World War Canoes and the preserved HMS Medusa.

Following the canoes up the Emsworth Channel we unexpectedly found ourselves as escort when the accompanying lifeboat was tasked. One canoe, using a sketch chart reminiscent of those designed to defeat the invading Germans, was equally defeated as they sought Northney Marina up the Mill Rythe Channel! We were able to set them on the right course before mooring up at the entrance to Mill Rythe for a lunchtime picnic.

During the picnic the lead canoe returned from a diversion to Hayling Yacht Company wearing a presentation White Ensign and duly acknowledged our dipped ensigns.

BOSHAM QUAY VISIT for PICNIC and ICE CREAM  - Not quite!

What a shame the weather let us down and was very unkind. It rained at 10.00 just as we were all preparing to leave at 10.30. Only Red Snapper and her crew of Belinda, Jane and Paul braved the rain;  well she does have a cabin.
All the other 11 topless members reverted to cars to meet up with  Paul’s crew for a midday lunch at The Anchor Blue in Bosham .
So Edward’s new boat could not be inspected; is it really finished ? We had the first floor room to ourselves with great views of the Bosham Pool and the coming and going of the tide.
We were all very behaved and quiet. We felt sorry for the other couple who opted to eat in the same room as us lot
After lunch Red Snapper left to catch the tide
The rest carried on talking until we all ran out of parking time. By then it had stopped raining and to really rub it in the sun came out.  Such is Hayling’s weather.

A good time was had by all

We were the only 'topless' boat to make it up to Bosham Quay today.  It looked potentially a miserable day, but perked up no end and we had some sun on the way back.  I think the others (12 of them) who came round by road were a bit peeved that they hadn't been a bit braver!     From Paul Cook

The sun was shining; the wind was light and from the south west Was all in our favour for the trip around Hayling Island?
We studied Gil’s navigation advice which proved faultless

We set off anticlockwise with wine at the ready
Reaching the bridge about one hour later was the time to open the wine !
Emmy fell behind Amorita , we wondered  -why air draft ? 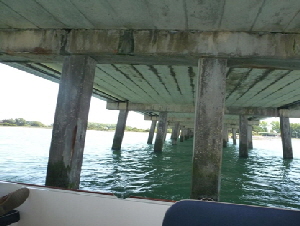 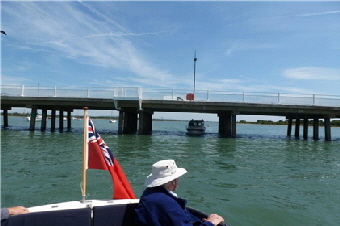 So we shot under the bridge first, taking the required photos
Emmy followed, with an air draft of 2.1m, had about 0.9m clearance.
Into the unknown , Emmy now leading the way, as Amorita had to stop for hat over board drill. The hat was recovered just before it sank so Barbara produced hat number two for the  Langstone trip.
We all landed at Ray’s jetty for wine and nibbles before the key ceremony to unlock the side gate to allow access to the Ferryboat for the all important lunch and toilet break.
Many thanks to Margaret and Ray who were away at the time Barbara produced hat number three for the trip across Hayling Bay.
Around the Langstone sand bar across the bay to West Pole and then a fight against the  tide into Chichester Harbour arriving at HISC at 1700

Having missed the trip to the Folly and Yarmouth your Captain was very pleased to accept an invitation to join Phoebe for what turned out to be an excellent trip, which also featured boats Red Snapper and Heron and a total of 8 people.

A reluctant tide delayed the departure of Phoebe to 11-30 am, followed by liaison with Red Snapper near the moorings. There was a brief stop at Seldom Seen for leak inspection before heading up the harbour in about 13 knots of NW breeze. With a couple of knots of tide and about 5 knots through the water, coffee on Phoebe was taken under the spray-hood. Thanks are due to Carol who provided coffee and biscuits outwards and wine on the return in the true tradition of Social Sailing.

The promised Port-Side mooring on the pontoon at Emsworth was full, so a very un-welcoming inner side was used by RS and Phoebe shortly to be joined by the Penfolds in Heron. Lunch at The Deck met with approval as did the general ambiance which was enhanced by the unexpected presence of the HISC VC-Sailing.

The morning cloud was replaced by hazy sunshine on the return journey which enabled us to see our beautiful harbour at its best. Well done Gil!

On a fine Bank Holiday Monday a small contingent of three open launches, Amorita 2, Heron and Phoebe, slipped their moorings in Mengeham Creek or Sparkes Marina and headed in convoy to Langstone for a picnic lunch and, for those that chose, a drink in the Ship.

Eleven Social Sailors and guests stepped ashore at Langstone having successfully got squatters rights on the quay before crowds of Bank Holiday crabbers arrived. At Langstone we were joined by one member who had scootered downwind and under engine on the A3023 the full length of Hayling.

We left the quay in plenty of time to get the drying boats back on their half-tide moorings with a cooler journey into the southwesterly with falling temperatures. Heron decided to stay on the HISC moorings overnight, thereby ensuring the following two days were experienced in empathy with those bottled up in  Bembridge  as conditions prevented a return to Mengeham Creek until Thursday!