The last week of the summer season started off on Monday in glorious weather for the trip to Itchenor.
The sailing  highlight was John Ainsworth and crew in his Wayfarer, equipped with Mizen hung with a cut down National 12 sail. This equipage got them home, without the main as it had now started to blow a bit , in a very stately and stable manner.
On Wednesday, Chichester Y C provided the usual excellent service and menu but this time we were in a new room slightly round the side of the building but still with a very good view of the harbour. We watched one red shank which spent the entire time in the company of a seagull braving the wind, waves and spray on the pontoon; the wind, waves and spray being responsible for everyone arriving by car!
Friday, October the 3rd and we had our AGM, which was very well attended, followed by lunch at the Club where the staff are trying a new system which utilises the same stimulating little squares that are used at CYC and negates the necessity for standing in a queue
Minutes of the AGM will be published in due course.

The Cruise to Haslar and Warsash
on September 17th - 19th

About 8 boats went on this trip and the crew numbers were swelled at Warsash by a additional carload. Arriving about midday with a favourable tide but not much wind, there was ample time to explore the environs via the ferry, but I did not hear of anyone visiting Pullingers. By evening it was getting a bit chilly on the pontoons and it was discovered, with some misgiving, that the Club was not going to be ready for us till 8.00 pm - despite all Anthony’s communications! However, as the sun sank below the clouds, most of the party repaired to the adjacent ‘Rising Sun’ and warmed up there until it was time to partake of the very good value supper provided by WSC
Many thanks to Anthony for arranging this visit and to Doreen for the Haslar venue.

The Cruise to the Folly was enjoyable and went without mishap although the return trip was surrounded by ominous thunder and rain on the hills.

The Cruise to Littlehampton, Sept 4-5th, had to be cancelled, really because of the bad weather forecasts. Thanks to Paul for all his hard work in organising and perhaps it will happen next year!

Meanwhile - other people have been doing other things.
Here is a report from Liz and Chris Alder.

It's seems ages since we last saw you all but we have just completed a trip from Inverness back to Gosport in a Sigma 400 (crew). We had some sun in the Caledonia Canal but thereafter it was mostly rain and wind so we were very glad to get past the Lizard and finally be on the home stretch! Our longest non-stop leg was 235 miles from Milford Haven to Brixham. We also stopped at Fort William, Ardminish Bay, Bangor in N. Ireland, Isle of Man (Douglas) and Holyhead. We had hoped to visit the Scillies but, due to the weather and time constraints, the nearest we got was seeing the loom of the lighthouse on St Mary's when on a night watch!
Unfortunately we won't be able to join you at Littlehampton or the Folly as we go to Brittany for 15 days from tomorrow (caravan this time) but we hope you all have a great time and hope to see you soon.

This was an absolutely fabulous trip, joining up with the Group of MacWester boats. Some boats went over a day early and got themselves a berth with a shorter walk to the conveniences but others arrived next day near high water but past the free flow so had to be locked in. The moderate wind was on the nose rather but the tide was favourable and the weather threatened rain but didn’t quite  - well not till evening when we were dancing in the drizzle but warmed by the BBQ fires and the all-in wine, and sheltered to some extent by the gazebos. The band was excellent, the food plentiful and a really good time was had by all.
Next day was free for a walk up to Newport (quaint) or a bus ride to Osborne House - an interesting experience for those who had not been round the house and gardens before. Back to the Marina for tea to find that rather a lot more large boats had arrived  and were rafted up  3-4 alongside!
The weather held and although windy was sunny and remained dry for the evening concert at Osborne House- which was quite fantastic and very stirring. All the right music - good food, and a bottle of bubbly included in the ticket, and then an amazing firework display - or rather three of them.
Bit of a queue and much manoeuvring next day to get out of the lock but free flow started at the advertised time and then it was easy. We did, however, have a rather rough following wind over an adverse tide and those with time preferred to stay another night at the Folly and leave early in the morning with a favourable tide and easier wind.
Very many thanks are due to Tony and Hazel Mills for organising all of this and including the MacWester fleet as well. They did a really good job and every thing went without a hitch - due, Tony says, to his military background!

16 boats went on this trip which was completed despite the sometimes rather windy weather. The winds, however,  were generally in a favourable direction so there was no lengthy beating to be done. It was a bit rough crossing Poole Bay and apparently there was a mini typhoon or some such, which went through on Wednesday night and those on the Lymington pontoon had a bit of a bumpy night, somewhat compounded by the passing of the ferries.
However, everyone seemed to enjoy themselves and the food was very good on all occasions. Numbers were somewhat reduced on the Thursday as half of the boats returned for the funeral and then others continued to Bembridge for a further 2 days.
Thanks to all of the organisers for making this a remarkable cruise!

PICTURE Of OUR BOATS MOORED UP AT BEMBRIDGE EARLIER THIS YEAR

Kindly sent in by Liz Alder 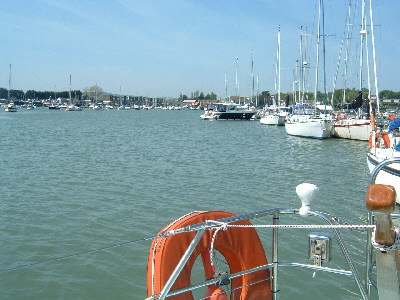 This was another idyllic cruise for, again, 15 boats.  We had a favourable tide and a sufficient easterly wind which held till most boats were off Cowes, when it switched to a westerly. This still allowed a good fetch into the River entrance for those who had gone close enough to the Island. Only a few lucky boats were able to get onto the pontoon of the RSYC  or onto nearby moorings and the rest, including Nicki Rizzi’s 57 footer, were on the new pontoon on the other side of the river. Fine if you had an engine on your dinghy - or if you had a dinghy at all - ‘Seldom Seen’ managed to break the handle off their outboard on leaving HISC - otherwise it was a hard row against the tide.
It was a good evening in the Club - which has a fantastic view, - and there was a surprise cake (with a very long-lasting ‘candle’) made, very kindly, by Judy Cave.
In the morning, it was off early - but not too early as there was not all that much water on the outside of the pontoon! - and a sail home, again with favourable tide and N W wind. Although the latter disappeared for a bit off Ryde, ‘Proud Moments’ was able  to sail nearly all the way home with just their spinnaker. And then home in time for lunch on the moorings.

15 boats cruised to The Folly Inn with a strong Easterly wind and juggled for places on the pontoon under the close scrutiny of the harbour master.
Lots of people walked up to view the Island Marina to inspect the venue for July and then everyone enjoyed a very good evening in the Folly.
Wednesday dawned bright but not quite as cold as the day before and after a few preparations all the boats motored up to the new Marina built by A member of the RYS!  There was a certain amount of panic on entering the Marina as the end of the pier rushed to greet the boats and it was suddenly realised that there was a violent ebbing eddy! All safely tied up and we joined, on the platform, a few others who had arrived by ferry. Drinks and a short, but exceedingly interesting talk, from Roger were followed by a wander around the permitted parameters and then lunch was served in the Pavilion - built by A member! Quick view of the lovely gardens and some photos and it was time to catch the tide for a rather prolonged beat home - the last boat arriving just in time before Bosun Clive went off duty at 9 pm
A truly great day out and and very many thanks to Roger Vickers for organising it for us. 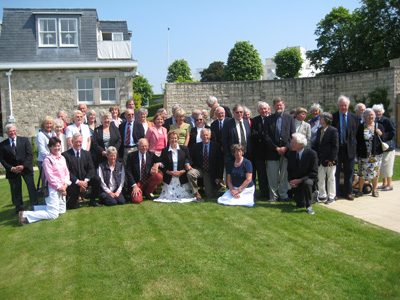 Picture sent in by Rosemary Gledhill

CRUISE OR DRIVE TO NORTHNEY

HAD TO BE CANCELLED. THE WATERSIDE BAR AT NORTHNEY IS NOT, AS YET, SET UP AND IT WAS RECKONED THAT THE PROFFERED MARQUEE MIGHT WELL BE A BIT CHILLY FOR APRIL!
IT IS HOPED TO ARRANGE SOMETHING LATER IN THE SEASON FOR NORTHNEY

It was replaced at short notice, by
LUNCH AT THE SHIP AT LANGSTONE

This event went off very well as usual. The welcoming manageress pushed tables together for us so that we had two big groups; members were heard to remark that they weren’t allowed to do this!
Great food; convivial atmosphere and lots of discussions

This has had to be canceled for lack of interest.

This fully licensed restaurant is 15 -20 minutes walk along the beach westwards from the Marina and is recommended by Doreen, Jane and Fiona.
It serves a good breakfast, lunch, coffees, ice-cream, etc  and is open from 9 am - 4 pm and Friday and Saturday evenings in the school holidays and Wednesday to Sunday, 9 am - 4 pm during the summer season
Rallies or individuals welcomed
Tel:- Charlotte 01983 760935