It had been decided to have our usual party on the night advertised, as usual, as the Turkey Dining in Night although it was on the Saturday this year. The ‘Dining In’  didn’t quite happen and we had to queue for a carvery.  But, this said, the food was excellent and the tables all very nicely decorated 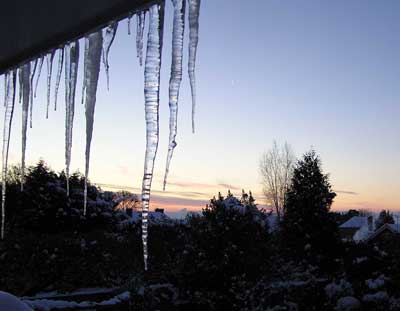 The weather however, was disastrous, with quite a lot of snow inland and promise of a big freeze later on for the evening. This deterred several people with far-flung addresses so overall numbers were a little reduced. None of the Wayfarers turned up and the Birthday party in the Bar was also cancelled. 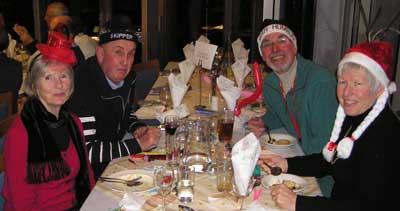 This meant that the Social Sailors,  Solos, and a small party of Fifteens had the place to themselves as no-one else turned up either. Doreen, unfortunately, also did not feel well enough to attend. 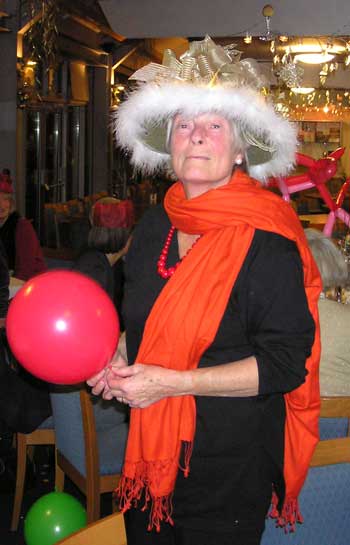 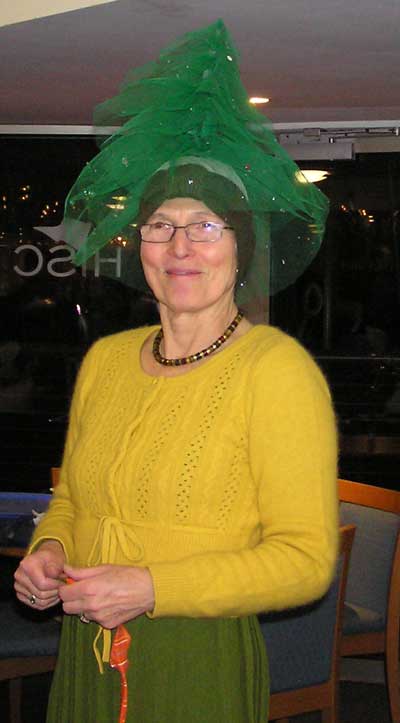 Assorted exotic hats were admired beforehand and it was obvious that some people had made a tremendous effort with their designs. Others were improvised during the course of the evening.

It was a very cold night and the heating in the dining room was still not mended properly so Nick had a gas blower going for us which, although noisy, worked wonders for the temperature. (Nick was supposed to be flying out of Gatwick for a skiing holiday next day but don’t know if he would have made it!) 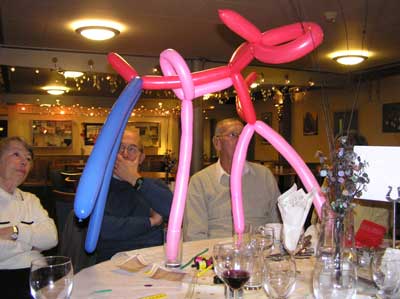 Havin g partaken of the main course the balloons were pumped up.(Must remember to get more pumps next time!) There were some rather good wizzy ones which went rather more in straight lines, lighted ones which were also quite good missiles, and caterpillars. The modelling balloons made very loud bangs when overblown but some of the Solos made a very large animal with a fifth appendage which no-one could quite explain. 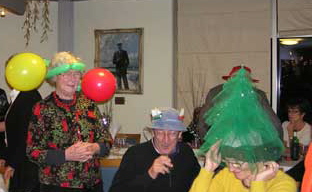 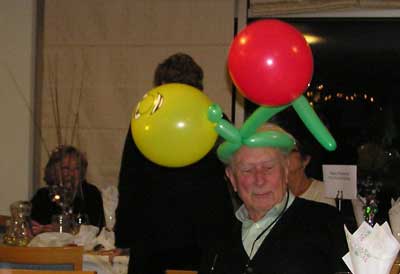 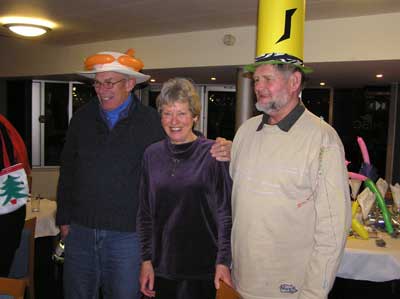 Last Cruises of the Season

Both of the cruises - to CYC and Itchenor - were well supported - rather better than some of the earlier ones - with 39 people at CYC and 36 for Itchenorl  Both were lovely days for the last week in September, although it could have been better with a bit more wind!

Organised by Tony Mills on Thursday, August 22nd, this was an event attended by 20 people all of whom were able to sail there as it was a nice day - no-one needed to come by car.  It was a happy gathering and as there were not too many people everyone was able to be together in the dining room and not have to overflow into the marquee, which apparently is a standard erection for the summer months

Only two boats sailed to Emsworth - most people going by car. More boats went up to Chichester but on Thursday, as it was blowing far too many knots, about a dozen people just went by car
Dell Quay was  well attended with 9 cruisers and 12 Solos racing - the latter all arriving within 3 minutes of each other - which made collecting the results quite tricky! In all 54 people partook of Liz Sagues Ploughman’s lunch and this time, to save confusion, lunch tickets were sold in advance. This worked quite well, although not  advertised, so it could be a good plan for the future.
The Thursday evening supper, put on in rather a hurry by Chef John as it had not been written in the events diary, and attended by 28 folks, was preceded by a drinks party given by John and Mildred in belated celebration of their Golden Wedding Anniversary.  The usual fun music and singing came afterwards and Doreen and Monica danced to ‘Georgia’

Cruise to Cowes and Warsash

We had fun over the water 28-30 June, and some new pics are up at the Soc Sail archive site:

NB, do watch out as Kevin C is out for a duck...  Tony Aitken

Margaret Stewart reports about Warsash:-
It was a lovely meal, there were  no complaints and everyone who had the Fish and Chips, on my recommendation, said it was the best ever.
Grace, the administrator, the young lady who waited on us and all the staff were very friendly, polite and helpful to the 18 sailors from HISC.
The two boats did not stay over night on your pontoon although booked onto it. The wind did blow up and it was very bumpy, so they moved, which was a shame because later on the wind died down as it often does.

Tuesday was a perfectly horrible cold and rainy day and only five people on Mike’s boat actually arrived by water - everyone else opting for cars!  In fact, it was quite a large party of about 30 folks - including various grandchildren, all huddled in the marquee at the edge of the Marina. Tasty sustenance, provided by Angie Driscoll,  and body heat eventually warmed the community and the picnic was enjoyed by all.
Thanks to our organisier - Roy ‘Barnes who reported:-
Because more people attended than booked in by the closing date for ordering the buffet I overcharged you all.
Thus I finished up with a £40 surplus. Unfortunately this is not enough to rectify my sad financial circumstances!!!
Consequently I put £20 to the staff social account at MDL Northney. I thought they looked after us very well. I will pay the other £20 to the RNLI.
I hope you find this satisfactory. Sorry about the weather.

Five boats left Hayling through thick fog on the Thursday morning. Fortunately, this cleared at Cowes so they were able to find the entrance to the Beaulieu River!   A pleasant evening was spent by the ten participants firstly aboard Mike and Jean’s Boat and at then at the Clubhouse for Dinner. Friday was a gorgeous sunny day for the return trip

Cruise to Southsea Marina, May 17th

There was a promise of a lovely day  with bright sunshine and not too much wind - which did not, unhappily, quite live up to expectations - the sun going in as soon as we had arranged all the tables on the Restaurant balcony.
16 people had eventually arrived in three boats, two cars and by 1 Ferry ticket and enjoyed an excellent meal -  a mixture of English or Indian of your choice.
Barry, on Kusi, took the opportunity of fixing, on his GPS, the outside racing marks and some of the ones not already located up the Langstone area. This is for a project that he and friends are doing to put buoys on Google Earth Maps (or some such thing!).

Cruise to Haslar Lightship May 11th

20 people in 6 boats enjoyed the hospitality of the Lightship ensconced on one long table. Only two boats, presumably with central heating, stayed overnight and progressed to Bembridge the next day!  It was rather cold

A cosy company of twelve enjoyed this trip and supper at Brading  Haven. The return sail was achieved in good time so that the boats were back on their moorings for lunch before the wind rose and the bar became bumpy!

Attendance numbers were slightly down for this event for various reasons. But those who couldn’t come missed out. It was a glorious, if chilly, day outside but in the sun room it was lovely - for a bit. When it became too hot, the diners had to evacuate here and socialise with the rest who were just nice and cosy and watching the usual penguin on the pontoon. Food, of course, was excellent and we are now getting to grips with the coffee machine
After lunch, as it was such a lovely day, with the sky reflecting blue on the full tide, several of us, Doreen included, decided to go for a somewhat muddy potter up to Dell Quay and back - well worth it.

An event, organised by Judy Cave who, with Mike, was unfortunately unable to attend at the last minute.  Doreen was, however, returned from her holiday in the Caribbean and welcomed the 30 guests who included our illustrious Rear Commodore Sailing, Greg Lamb,  who had come with the intention of investigating ESC’s Starting Box procedure.
ESC’s Caterers were duly thanked for the excellent food and service and several interested folks then spent a delightful  half-an-hour watching a kingfisher catching minnows in the miniscule creek, the tide being well out,  below the picture windows.

The first event of the year, Lunch at the Club, on Friday January 8th was attended, though somewhat sparsely!

Snow and icy conditions had prevented the chefs from getting to the Club but they did make it in for Friday. About 10 stalwart members also managed to arrive for lunch, braving the treacherous conditions of the causeway - although the Bobcat had been put to use clearing some of the snow.
Other people were, unhappily, stricken by the usual coughs and colds of the season and others - living a bit further out in the sticks - or just up small lanes - were unable to get their cars out and had to be content playing in the snow.
One could but think of things to come  or muse on events of last summer-
From Jan Wareham:-
We managed a few Soc sails, plus we did our own cruise as far as Weymouth. We also enjoyed some lovely Solent amblings, including a memorable misty autumn one
to Gins Farm, with hardly a soul there.
We would love to ski or sledge in this snow but Hayling's rather flat!